Get Into Conversations Easily With These 3 Tips! 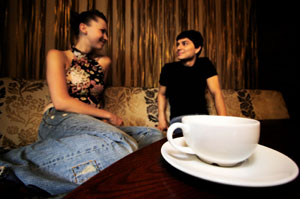 Ever want to talk to someone but didn’t? Were you focusing on that perfect first line? Maybe you just stood there unable to move…

Ultimately, they more than likely walked away while you lost your opportunity. Possibly you worked yourself up and never said hi to the person.

But by recognizing a handful of truths of human nature, you can make things easier on yourself. Here are a few hints:

1. Stop struggling to begin with something perfect

Tests have shown many people don’t remember the start of a chat. So what you start out with doesn’t make a difference. You bond after talking with them a bit. The underlying tone from the encounter is crucial over what you say.

Being fun, optimistic and engaging will usually help you make new friends. I know, that can be the difficulty sometimes. But by pushing through more conversations, you grow your proficiency to do this.

You might cringe at the thought of talking about the weather, but it works. Small talk is seen as “trivial” talk without further significance. But when chatting with someone new, that can be a good thing.

Because small talk is so ordinary, it’s comfortable. That’s often a good thing when two people meet. It makes knowing each other easier. Mentioning the friends arguing or the warm temperature or the person’s nice shoes gets things started. Doing this is one of the easiest ways to improve conversation skills.

Don’t be dull. That’s not what i mean when I say first words aren’t so important. Infuse excitement into your communications. Smile and show enthusiasm to have a better response. Nod your head to show understanding. Motion more and make bigger facial expressions in reaction to what he or she says. You may think you’re overdoing it, but in most cases you just aren’t. It’ll end up getting the other person more involved, too.

Finally, don’t forget not every conversation you try to start will go perfectly. That’s just not realistic. In a way it’s a numbers game.

I find way too often we lose heart after only a few tries at being more extroverted. If you’re fighting a lifetime of awkwardness and poor people skills, two, five or even ten courageous attempts at talking with new people isn’t good enough. You have got to keep at it!

But by using the previously mentioned strategies, you’ll increase your chances of finding those people who are in the mood for a chat.